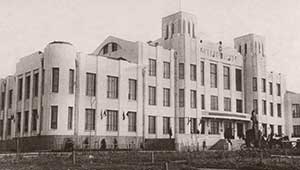 Palace of Labor is a trade union centre where the workers discussed the vital problems. It was built in 1926 by the architect S.A. Shestov in the romanticism style. It was planned as a united complex with the cinema “Proletkino” (now “Victory”). They both might look like a sickle and a hammer from the skies. But the project wasn’t realized.

Originally the Oktyabrski Road should have been “cut” towards the Railway station so now Palace of Labor doesn’t face any of the streets surrounding the building.

In 1936 three-storied building was reconstructed and built on; classical elements, moulded bas-reliefs presenting professions of those days appeared. On the right you can see miners, teachers and gardeners; on the left there are adventurous parachutists, aircraft modellists, sailors and metallurgists.

Originally Lenin Monument was placed by the steps of Palace of Labor. After the reconstruction the monument was replaced and now it stands on the pedestal in front of the building.